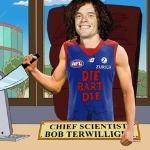 MFCSS rubs true   We are 2nd on the ladder with a round and a half to go for 2022. Yes our form isn't as strong leading into finals as last year. Yes our best footy is still the best in the

I highly rate this team. The emotion of it all takes hold when expectations aren't met. I'll be first to admit that my negativity sometimes gets the better of me. I thought in the heat of battle that