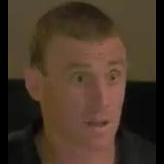 It's funny because Derm used to straight up belt people in the head when he played, and now he's the patron saint of fair play? The irony is simply too much. The bloke is an absolute moron.