MATCH PREVIEW AND TEAM SELECTION - Round 15

If we win we'll have to start an "Awesome kick-ass records" thread... 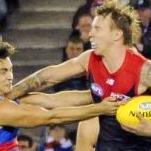 Interesting article in the Australian: "A Melbourne victory over Sydney on Friday night at the MCG will equal an AFL record of four ­consecutive wins in 18 days, previously achieved only once in